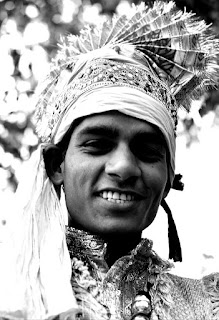 "That is very much a table, an end table..lets put this next to the sofa, I anyways do not like guests placing their mugs on the center table, its invariably stained", Vedika said with an assertive clarity to her seventeen year old daughter, who had bought a piece of furniture from Delhi haat to serve as a dressing table stool in her room.

Vedika and Vanya bought things for the house together, but mother and daughter had contrasting choices and Vedika being a single parent was able to boss her way through most of the times, except when she realized that poor Vanya was like a pet who did not have a choice till the time she was living in her house, she would then give in to Vanya's opinions, suggestions and poor taste of things out of pity.
“Mom! from which angle do you find it to be a table, this will go in my room.. and get table coaster for your center table instead of looking for reasons to grab my dressing table stool", Vanya retorted in agitation.

"Well it clearly looks like a table to me and I can choose to look at it like a table and use it like one too, and sweetie it will go with our sofa, I had been wanting to get something like this but could not take out time because of your exams". Vedika replied.

"Mom! really!, my exams stopped you from going out to buy something you wanted to!, Maa... you are such a crafty, guileful mother... fine have it your way, I will buy another for my room". Vanya said with a smile on her face. They looked at each-other and laughed. " No Vaanu..., you can choose ....you can choose to look at it as a table, this piece of furniture, you can make it a table or a stool without even raising and eyebrow, alter your thought and magic happens, the stool can become a table and a table can become a magnificent foot-rest.

“ Right now I am choosing not to hate you maa”, Vanaya said politely while picking up her bag, moving to the dining space for an apple.
“Thank you lady, and since you are being kind to me let me also ask you to stretch your accommodating self and be welcoming to Keshav, I have invited him for lunch tomorrow”, Vedika spoke loudly sitting on the sofa. “Wow mom! Just two dinner dates and we are having Mr. Keshav over for lunch, he must have gotten your violin playing, it would be nice to meet him finally”, Vanya smiled with her eyes as she spoke to her mother from a distance biting into the apple.

The following day was a Sunday and both ladies got themselves busy with tidying up the house after an early breakfast of muesli with cold milk. Much time went by cleaning their respective rooms and before they realized it was almost noon.

“Vaanu I am going out to get Chinese for lunch from D-block, will be back in half an hour, if you like you can make yourself more presentable and look like a well bred child” Vedika shouted from the lobby as she picked up the car keys from the holder on the wall.”
“Ok mom”, Vanya replied

Vanya was contemplating a head bath when the door bell went ding-dong. Vanya walked to the door and glanced through the side glass. There was a stout medium-height man in a blue and white check shirt and brown pants standing at the door.

“Oh my, he’s here early”, Vanya said to herself and opened the door with the biggest smile, “We've been waiting for you, please come in, mom should be back soon”, Vanya sounded very happy to have the guest over as she spoke while ushering him to the living room. The guest followed her with a returning smile and planted himself on the sofa.

“Can I get you something? some ice-tea”? She inquired.

Vanya sat down on the chair across the center table, looking at her guest as he glanced through the magazine , for some strange reason she found him to be very calm, collected and cute too, she could see her mother being happy with him, and imagined him dropping her off at the college and all three of them having supper together each night.

The bell rang again, Vanya rushed to open the door, “Mom Keshav Ji is here, he is cute”, she said in a hushed tone.

Vedika hastened to the living room, the moment she entered the room, the man got up to greet her with a smile and a namaste.

Vedika lit up seeing him." Rajan Ji namaste", she said with an ear to ear smile.

"Vaanu I forgot to tell you Rajan Ji is our new cook and he shall be cooking for us from beginning of next month". Vedika said looking at a Vanya with a straight face.

Later that afternoon, Vanaya walked up to Vedika "Mom I get it...we can choose how to look at things and alter the table into a stool or a stool into a table and design our lives around our chosen thoughts..I almost got you married to Rajan Ji". They both burst out laughing.