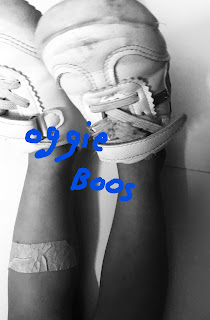 Shafaa had been walking with her mother in the bazaar. After having a big lunch at ‘Chutney Pie,’ Shafaa and Amonia came to a shoe store, to buy shoes for Shafaa.

As they entered the shoe store Shafaa saw bright blue sneakers with a white toe cap.

She showed her mother the blue sneakers and mother agreed to buy those for her. Shafaa was very happy as she carried her shoes in the box back home.

‘Oggie Boo you are my favorite pair of shoes’, Shafaa spoke to her blue sneakers. She had named them 'Oggie Boo' and wore them to school the following day. After coming back from school, Shafaa pushed the blue shoes out of her feet without untying and loosening the laces and threw each shoe in different corners of her room.

As days went by, Shafaa became sloppier about Oggie Boos.

She would play in the mud with her blue shoes on, run around the school, and play football too. But when she came back home she would push her ‘Oggie Boos’ out of her feet without opening the laces and throw them carelessly.

And she did the same every day.

One morning Shafaa could not find her blue shoes in the room; she looked all over but was not able spot the shoes anywhere.

After searching everywhere in his room, she went outside looking for Oggie Boos.

They were lying near the bookshelf outside his room. Her blue shoes were not looking blue anymore. The shoes had layers of dried mud on them and looked grubby.

Shafaa was late for school, she hurriedly pushed her feet into the shoes without unknotting the laces, wore the blue grubby sneakers and ran for her school bus.

But that day Oggie Boo were biting her feet. Shafaa's feet hurt from the shoe bite whenever she walked fast or ran.

It was 1 P.M, Shafaa came back from school limping. “Mamma! Oggie Boo are hurting my feet!” she said to mother with a sad face.

“Come here Shafaa”, mother called her and made Shafaa sit next to her on the red chair.

“You know Shafaa, you are not Oggie Boo’s favorite person anymore. And that’s why they bite you on your feet” mother said to Shafaa pointing at the blue shoes.
Shafaa did not quite understand mother. “What do you do you mean Amonia,” asked Shafaa.

“You never take care of your favorite shoes. You never untie your laces before taking them off. And do you ever clean your Oggie Boos?”

“You play in the mud but you never clean the mud off your shoes,” mother said.

“If you take care of Oggie Boos, keep them clean, wash them every month and untie the laces with your hand every time you want to take them off, your shoes will not bite you feet because you would be taking care of them.”

Next day was a Saturday. It was a holiday. Shafaa took Oggie Boos to the garden and washed them with soap and water and then kept them to dry in the sun.

On Sunday morning Oggie Boos were bright blue again and Shafaa wore her favorite shoes to her friend’s birthday picnic.