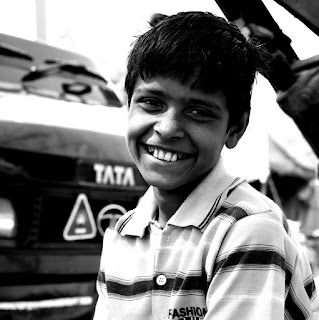 Aslan! What did you do? Boss has been asking for you ever since he came in. “I don’t know what I am doing Rishi and don’t know what have I done", he gave his colleague a faint disparaging smile keeping his backpack on the table, wiping his face with a tissue pulled out from the tissue-box at his daily-desk.

On his way to work in the metro he had seen this gentleman again. He saw him almost every other day in the metro on his way to work, and Aslan could not help but notice him for his kind manners and most forthcoming smile, he always found him talking to the co-passengers, or offering them his seat, or at times people seated offering to hold his bag when he did not get a seat. The man was always interacting enthusiastically and smiling honestly..., seeing such human interaction fascinated Aslan. One time Aslan had noticed him open his briefcase with such heedfulness while sitting with everything was so tidily kept, he was certain that the person loved his job.
“How would it feel to be content forever, enjoying your work, being happy in your place, have opinion about everything…living and breathing with full body and mind in this sea of everyday life"…Aslan thought to himself. He was at peace when he came across such people. It helped him to wander away for a while.
Taking a swig of water from his work-time hydrating desk water bottle, he walked to his boss cabin. "Good Morning sir, were you looking for me?", he asked Ajay Moitra, his chubby boy-faced boss with thin finely worked upon pencil mustache running along the contours of his upper lip making him look mischievous.
"Where are you going for holiday?- Delhi?, Its mango season there", Moitra inquired, before Aslan could respond to the question, he leaned forward stretching his left arm to pick up a thin ream of stapled pages lying at the opposite corner of his desk. Aslan jerked to pick up the papers and handed them over to the overstretched arm. “Sinha’s team did a preliminary on soil mechanics and shared the report with me late evening. It's not as comprehensive as I’d like, and I want you to have a look at it and let me know if we can suggest few more things that they could include in their report, before it is passed on to the management for approval," the boss said while trying to unbox his new phone. "Will do sir, is it ok if I come back to you on this by tomorrow", Aslan responded suppliantly. "You shouldn't rush on this, please do a thorough study of it and come back to me by Thursday to discuss it, I need to reply by close of business hours on Thursday..thanks". The boss was looking at his computer screen now, and Aslan left the cabin with papers in his hand.

Aslan wasn't sure what peeved him, but extra work was the last thing he wanted as a first thing in the morning. Coming back to his chair he asked for a cup of black coffee from the office boy who was moving in slow motion wiping the table at the doorway.
The laptop was powered up and he opened his mail box to see a bunch of unread emails. Most of them were not even meant for him or could have helped him in his work, but those unread emails were there in his mail box stacked up in bold black letters because the senders thought that it was necessary to keep him in communication loop to cover for any fall out. After all if he was copied in an official correspondence, he too had taken a lap-dance with the sender. "What is it with these people?, why do they keep me in copy in their e-mails, I don't know if the London office received the letters from the auditors or not!!!, he soliloquized pleading not guilty.

What is it about”, Rishi the inquisitive colleague asked turning towards Aslan with one hand on the mouse”. “Boss wants me to do a report analysis for the Ivory coast green field project underway. I had my work-day all planned out for today while in the metro, will have to re-prioritize now, as the recommendation needs to go to the management by Thursday.”
“Hmm..how was your weekend, did you do anything interesting", Rishi asked, choosing not to comment on Aslan’s response.” Coffee arrived on Aslan's table, its first sip was the only thing Aslan was looking forward to to take on the day.

Hours had passed working on the keyboard without a break and Aslan was hungry. “Are you done with most important task of the day Rishi?”. There was no response. He looked over his shoulder for Rishi, but he wasn't there. There was no one in close proximity. The office boy was idling in his white uniform at the far end of the last cubical. He had felt a gentle touch on his shoulder which made him think that Rishi was back from his lunch. Without a second thought he called out for the office boy, “Shaamak !”. Shaamak heard him and got up from his chair and dragged himself as an answer to the call without speaking a word in reply. Aslaan drew his wallet from the front pocket of his backpack and handed Shaamak a hundred rupee note, "please get me a chutney-cheese sandwich and a coke.”. He went back to his computer screen after he got a dispiriting “ok boss” nod from Shaamak. The office looked like a sleepy library with empty cubicles and forced silence. He got up from his chair and walked to the window to look outside, it looked like every day.

Everyday was like every other day and Aslan nurtured thoughts about the stagnated geologist in him, the state of affairs were morose and comfortable. At times he used to wonder what was to become of him in coming years, what was he capable of, why and how did he become a geologist, what if he hadn't gotten into the habit of paying his bills? What if his capacity to pay for those bills was not based on the fact that he was a qualified geologist? He imagined the day when the rest would find out that he was less ordinary than they thought.