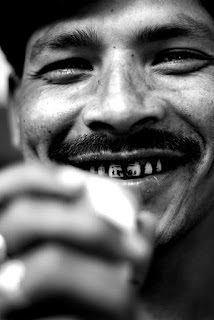 “Bhai ! thoda jaldi chalao”, Aslan said asking the driver to speed up. He knew he wouldn’t miss the flight to Abidjan but he was anxious to be at Netaji Subhash Chandra airport soon, and traveling in a cab to catch a flight always made him anxious. It did not matter how early he left for the airport, it always worried him sick thinking that he will be late for check-in. He got down from the taxi and ventured inside, his anxiety to be at the check-in counter pleased him this time; there were just two women in front of him…the three of them making the queue for luggage check-in for a long thirty-one hour journey to Ivory Coast.
All he could think of now was a nice cup of coffee and a granola cookie at the food court.

It was half past eight; boarding had started when Aslan picked up his hand bag and started walking towards gate number thirty-two finishing his coffee with a last sip dropping the cup in the recyclable waste bin. Standing in the queue to get into the sky-walk he observed people around him, there were four old women dressed up in sweat shirts and track pants, a girl with three nose pins clicking selfie with an elderly lady, a young mother warning her little boy wearing small black sun glasses not to litter. He wondered why were those people traveling to Abidjan, what could they possibly have there to go to…, he wanted to know their stories. The queue was snaking and he kept inching towards the sky-walk leading to the aircraft entrance lost in his vague thoughts.
Suddenly he was excited about traveling to a new country in west of Africa though Sunday was the day when he always preferred staying at home watching web series. There was something in that moment that he reveled in, the idea of unknown, the possibility of never being able to return, experiencing a new way to live.

Taking his window seat, Aslan acknowledged the two women sitting in his row with a feeble smile and got smiles in return.
The momentary calm and the possibility of anything being possible that he had experienced a while ago had washed off now. The seats in lines and rows, numerous heads jutting out from the headrests all in the file of life, the cabin crew in uniform, and the familiar smell of air freshener, all reminded him of his destination and the purpose of his visit to Abidjan and that he had to perform as a dependable geologist at the site, and that his salary bonus would be due soon.

The plane was in the air now and Aslan was staring at the headrest of the seat in front of him. The women next to him were discussing the synergistic application of chemistry in energy conservation while he was waiting for the drinks to be served. The ladies were indiscreet about their affection for each other. Every time they held each other's hand during their serious discussion, Aslan could sense the love and respect they had for each other. Gradually a melange of emotions past his being. He wanted to be in love, drive on a long lonely road with the setting sun in view, have a glass of whiskey in the company of people who were very happy to be around each other and even happier to have him and where they would still like him as much without him having to talk.
“What will you like to drink sir?”, a cabin crew attendant asked with a smile.
“I just envisioned myself having a scotch watching the sun set, so I will have a scotch, Aslan replied with a big smile.

The drink was poured and served to him, first sip and Aslan had decided that he will be having another one. “I wish I was so sure about other things in life too”, he mumbled to himself.

“Don’t do this to yourself”, the lady sitting next to him said with a serious look. “Sorry?" Aslan looked at her in discomfiture, he felt she had read his mind. “Do not enjoy your scotch so much, you will be punished for seeking simple pleasures,” she said, they looked at each-other and laughed.

“I am Tashkeen", the lady said extending her hand. "Aslan" he said his name and brought his hand forward to shake her's with a smile. Aslan also extended his arm forward to Tashkeen's partner and she shook hands too. “Anita,” she nodded.

“What takes you to Abidjan", Aslan inquired looking at Tashkeen. “Oh I am just giving her company", Tashkeen said looking at Anita with a faint smile. "I had a conference to attend", Anita added, looking at Aslan.
“What do you do Tashkeen", Aslan wanted to now. “I am a cab driver in Delhi, I drive with Uber,” she said. “Don’t you get tired driving around in Delhi’s traffic?” Aslan asked.
“Well..teaching physics to college kids in an hour long lecture is not as much fun anymore as picking up new faces and driving them to their destination while chit chatting on the way”.

“Don’t do this, do not seek simple pleasures in life,” Aslan said with a bravado and all three of them laughed aloud sipping on their drinks.  Later food was served.
Aslan managed to fall asleep and slept for a good four hours. The waking hours were spent reading magazines, sharing thoughts with Anita and Tashkeen. They shared their life stories, how friends with whom they spent growing years were not close anymore. How it felt to hold little bald babies, how dancing was a pure expression of being in the moment and how age was shredding away flexibility. The hours passed while Aslan opened upto his new friends on the flight.
The Captain announced their expected arrival time at the destination.

“I haven’t taken off my shoes for the last two days,” Aslan thought
and took a deep breath to begin.